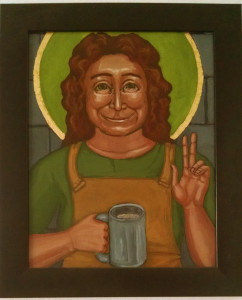 I’m just a little late in honoring the feast day of one of my favorite saints, Brigid of Kildare.  St. Brigid was born in fifth century Ireland, the child of a court bard.  Both her parents were Druids, but she decided at an early age to become a Christian.  Eventually she became a nun, then an abbess, overseeing the monastery at Kildare which she founded at a Druid site where there was a holy fire.

While Brigid is honored on February 1, an important Celtic holiday is celebrated today, February 2 — Imbolc, which looks forward to the return of spring.  Imbolc is a fire festival, so it links with Brigid’s day, which celebrates holy fire.

Celtic spirituality celebrates life.  It doesn’t make the distinction between the spiritual and the earthly, but finds that everyday moments are chock full of mind boggling holiness — and vice versa.

So today have a beer in honor of the saint who once prayed for a lake of ale, enjoy the subtle signs of spring’s return, and light a fire with your beloved.